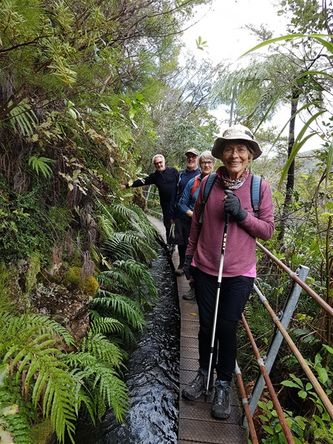 On the 27th we met in the carpark at the beginning of the Pupu Hydro Walkway at 11:30am. Starting adjacent to the power station it’s described as one of Golden Bay’s most enjoyable short walks which everyone agreed.

From the carpark we decided to take the route anti-clockwise which meant a steepish climb of about 25min up to the water race, built during the gold mining days in the area. From here the track levels off following the water race upstream to Campbell Creek where the water is diverted into the system via an intake weir.

This was the lunch stop where we were joined by some of the local bird life including one particularly cheeky robin.

Sections of the path have been built on timber platforms cantilevered over the water race channel with suitable steel tube handrail. However the advice from DOC is that all small children should be carried in a backpack as although the fall into the channel is not far it is potentially dangerous as the flow in the channel moves quite swiftly. Fortunately none of the group got wet.

After lunch at the Campbell Creek weir we followed a 4x4 track back down the hill to the cars.

Total length 5.5km which including lunch and a number of other stops to enjoy the views took the group just over 3 hrs.

Overnight in Takaka was at the Mohua Motels, a pretty new development, where host Murray runs a very pleasant spot.

Thursday evening pre-dinner drink were at the Telegraph hotel and then dinner at the local Thai restaurant O’Sha in the main street an easy walk from the motel. We were well looked after and well fed. Sixteen came to dinner pretty much filling the available space.

On the 28th the day started in Collingwood at the Courthouse where we met for coffee at 10:30am.

The Aorere Goldfields Track up the valley of the Aorere River and we were able to park at Druggans Flat at the end of Devil’s Boots Road. The walk is a circuit up to Druggans Dam and then turning back to the car park.

The first hour or so is generally up and the track was in good nick. Stafford’s Cave and the Ballroom Cave are both accessible from short side tracks. We stopped at the Ballroom Cave which is an impressive space and certainly large enough for a small “ball” as the neame suggests.

The upper section of the track parallels another water race channel which was used to direct water from the dam to the mine locations. The channel was generally excavated through rock with a number of short lengths of tunnel also through solid rock. Very impressive given that the work must all have been done by hand.

Some great views of the northern areas of Golden Bay from the track. We were lucky  to have a lovely clear day and at one point could see as far as Farewell Spit.

Lunch was on the bank by the outlet tunnel at Druggans Dam then back the way we came for most of us as the second stage was thought to be a bit wet and slippery. “Most” as we managed to lose Murray Dawson who decided to visit a friend in the morning and was late arriving at the carpark.  He then walk up behind us with his friend and passed by while we off visiting the Ballroom cave. He re-joined us in the carpark car park by 3:00pm from where we all headed home.

A wonderful couple of days enjoyed by all. Obviously lots more to see and do in Golden Bay so a trip out there should be kept in mind for the future.

Thanks to Peter Jamieson for adding this overnight trip to the calendar for this year.

Lots of information about these and other walks in Golden Bay on the DOC website.