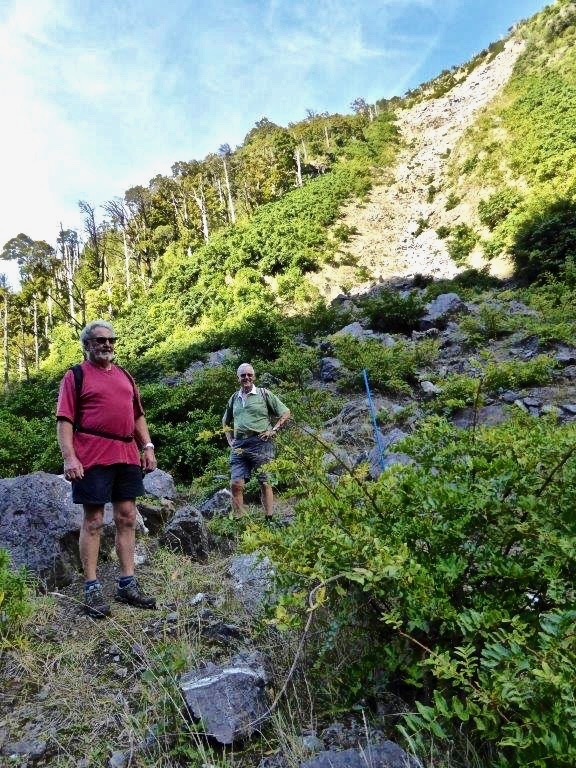 After some rearrangement of the day to ensure fine weather, 19 Social climbers (several new to the group) carpooled and set off from the ASB centre. After morning tea at Tapawera, we had an “interesting” and scenic drive into the heart of Kahurangi National Park.

The Wangapeka Track starts from a car park full of bird song, mainly bellbirds and tui. The gentle gradient track quickly morphed into a tricky “1 person” swing bridge over the Rolling river. Successfully negotiated the track opened up alongside the beautiful Wangapeka river. After a boggy patch the track settles into a well formed undulating pathway and the river was our constant companion.

Along the way, we met a friendly Robin and enjoyed plenty of birdsong to cheer us on the way. After an hour or so, lunch seemed in order and Rebecca requested a sunny spot overlooking whio in the river – Wayne obliged with both and I was thrilled that I hadn’t oversold the trip in the preamble. After lunch some chose to return and others continued to the destination – the river lake formed by an earthquake in October 2012. Destination reached the survivors returned for home. The return was more purposeful and rapid and took about an hour and half.

I think there was universal agreement that the river and bush in this area was sensational – a beautiful day helped! Our birdlife tally was 3 pair of whio on the river, numerous tui, bellbirds and fantails and at least half a dozen robin. There was also a stroppy pair of weka on the way home! All in all an excellent well attended day. Special thanks to the drivers who ferried us all safely there and back.